When You’re Not There Yet

Sandra came into her lesson this week saying that she sometimes thinks about giving up on getting better at the piano. “Other people can just sit down and play,” she said. “Kids can start lessons and after a couple years they’re playing.” She had made so much progress in the few months of studying with me, but she had a lot to overcome. And it doesn’t happen overnight.

She said she felt frustrated still struggling with getting her hands to work well. I know that with her amazing attention to detail, she can go much further than she realizes. But I also know from helping other pianists transform their playing that in the middle of the process it can be easy to lose hope—because you don’t know how to play the old way anymore, and you also haven’t yet become comfortable playing the new way.

And I also know this scene well with my own life, in general. Whenever I venture into new territory I feel anxious. I may launch a new program and not know if enough people will sign up for it. Or I may select people for a program and be anxious about how it will go. Sometimes I set up a meeting with a potential donor to the Institute and get antsy about my ability to relate to them effectively. And even when I’m preparing to leave town for a meditation retreat—so I can relax, catch up on rest, and clear my mind—I can get nervous about what kinds of intense emotions might going to come up once I have a week away from work projects.

Being in transition and facing the unknown just doesn’t feel particularly comfortable.

Sandra had done an amazing job of undoing extreme tension and shakiness in her hands at the piano, and It’s understandable that she would want better results faster. But we each made an important discovery at this lesson. When I pointed out that the middle joint of her second finger was collapsing, and worked with her to keep it in a stronger, curved position, she showed me that every joint of all of her fingers can collapse, or “bend backwards,” that way—her hand is hypermobile, or what is commonly misnamed “double jointed.” And she thought that everyone could bend their joints backwards like that!

This was a huge piece of new information for both of us. For one thing, I appreciated even more the hard work she’d done to use her hand more effectively. And she was able to feel more sympathetic toward herself, because she realized that she was working against her hand’s natural tendency.

Most importantly, as soon as I learned this about her hands, I immediately thought of some simple exercises she could do to strengthen the muscles that control those joints. Each joint of each finger has a separate muscle that controls it.

I explained that some people have more flexibility in their entire body than others. In fact, I showed her that although my fingers don’t bend in reverse like hers do, I can touch my foot to my head (and I’m 71). I also mentioned a couple of strengthening exercises I have to do to keep my joints strong. Then I suggested that she practice touching each finger to her thumb with a bit of a squeeze, to strengthen the muscles that bend her finger that way. Here’s a picture of her doing this with her second finger: 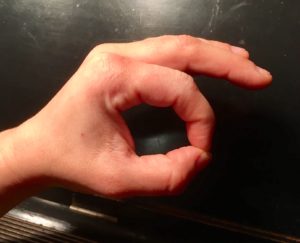 Then I asked her to pick up a pencil and notice how her hand naturally operated. Here’s a picture of her doing that: 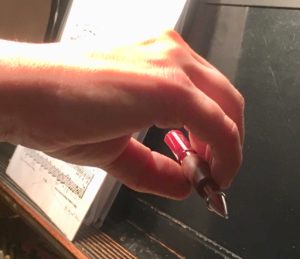 I told her, “You make this motion countless times every day. Every time you pick up a pencil, or a piece of paper, or a glass of water, you’re naturally using your hand in a healthy, effective way. So it’s a matter of reminding yourself that this is how to best use your fingers at the piano. “Just gently press each finger to your thumb this way, away from the piano, in spare moments during the day, to reinforce the movement you need when you’re playing. Then transfer it to the piano.”

When Sandra saw how easy it was to use her fingers this way, she realized that in her effort to keep a rounded hand position on the piano keys, she’d been playing on the tips of her fingers—almost on her fingernails— instead of on the finger pads. She described the sensation of playing on the very tips as “very annoying.“

Now that she had a clearer understanding of how to use her fingers, I guided her toward playing on the finger pads, instead of the tips, while still flexing all the finger joints, and she began to feel more of a natural connection with the keys. She was relieved to have this new experience in playing.

The way we touch our instrument is so crucial. If we do it well, the musical energy in our body can go directly into the music we make. I’m excited to see how Sandra’s playing will develop now. I think she’ll enjoy it a lot more now—that it will feel better to play, and that she’ll hear more music coming through.

Thank you, Sandra, for inspiring me with your amazing focus and motivation. And for joining me on this creative journey of learning more about playing the piano.

P.S. If you’re a pianist in the New York area and would like to break through habits that are holding you back, I invite you to check out my upcoming piano master class series, starting January 23.
P.P.S. And no matter what instrument you play, the Art of Practicing Institute invites you to apply to our legendary, transformative summer program, happening next July!