I have a gift for you today that comes straight from my heart. It’s a free listen to the first 20 minutes of the Art of Practicing institute’s new audio release, the Performing Beyond Fear exercise. 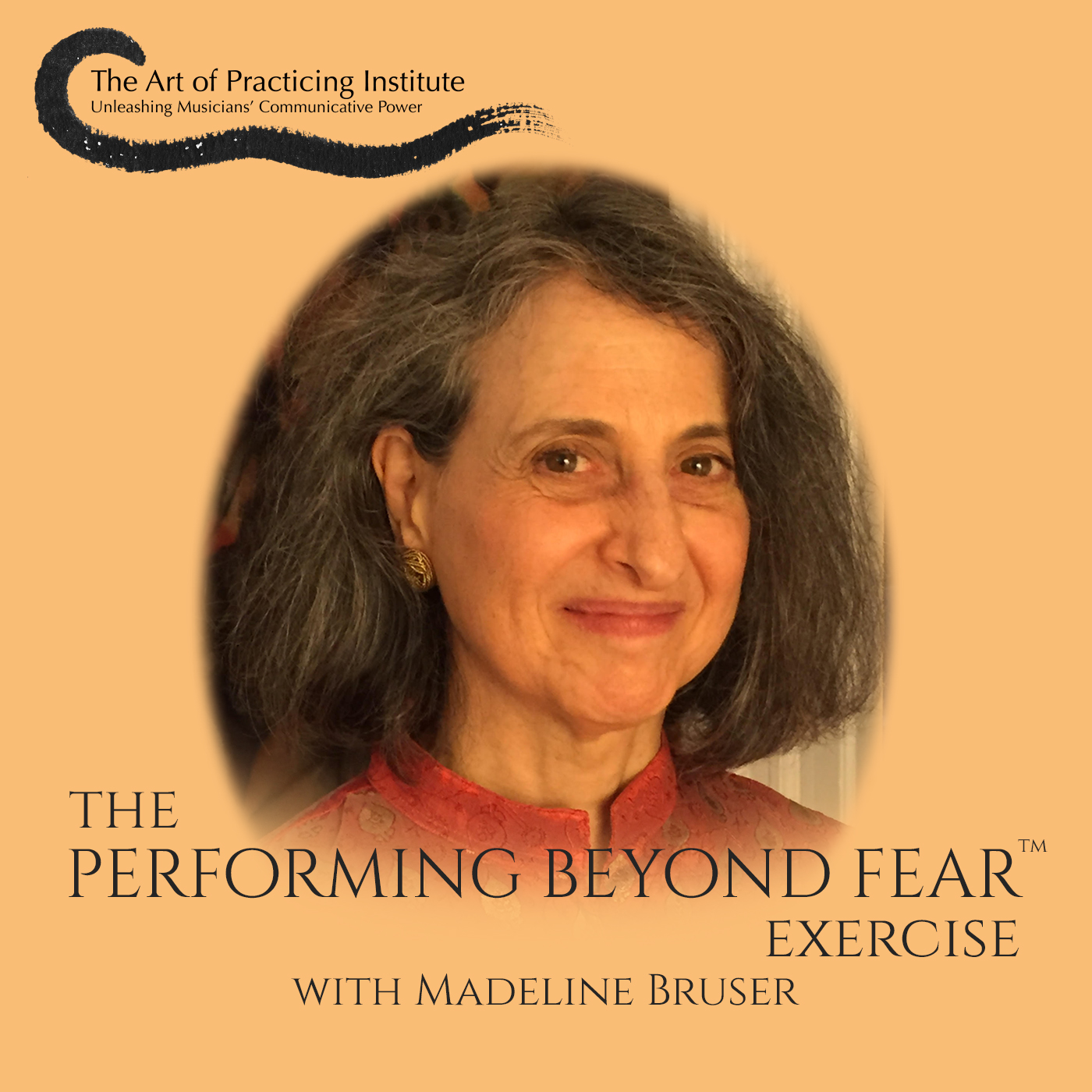 I developed this exercise to help musicians cut through stage fright and bring out their deep communicative power. In just seven minutes, it transforms your music making, both onstage and off.

It’s true that we need a reliable technique and a thorough knowledge of the music we’re playing to feel confident about performing. But it’s our state of mind that makes the difference between a good performance and a truly great one.

So I invite you to try Performing Beyond Fear—in the practice room first, and then before going onstage—and see what happens. There is powerful human energy inside of you, waiting to shine out and reach the hearts of everyone who hears you.

Click on the CD image above to open your gift.

(This article has been edited since it first appeared in this e-zine on December 25, 2012.)

Although I didn’t grow up celebrating Christmas, I’ve always felt the spirit of the season and have been moved by how this particular day transforms so many people. Their joy in giving and receiving gifts, in expressing love, generosity, and appreciation, is beautiful and contagious.

The anticipation and planning of this special holiday remind me of the ritual of giving a concert performance: We plan and prepare, with excitement and care, and then the moment comes when we give our gift to our audience. It can be a wonderful and powerful experience.

But usually, giving our gifts onstage is a lot harder than buying a present, wrapping it up, and putting it under someone’s tree or into their hands. It involves complex and demanding preparation, and even if we’ve learned the music extremely well, we may nevertheless lack confidence at the crucial moment of performance.

Often, the reason we lack confidence onstage is that we’ve never fully discovered the gift we have inside of us. We’ve carried it with us all our lives, and we’ve perceived it to a degree, but we’ve never fully unwrapped it and seen how beautiful it really is.

When we don’t fully unwrap the gift we carry inside us, it can feel like a burden. We sense that it’s there, and we want it to just leap out of us and victoriously take the stage. But we feel frustrated because we don’t know how to make that happen.

Some of us do unwrap our gift when we’re alone, practicing our instrument—music flies out of us, and our heart soars. But when an audience is watching us, we somehow hold back or clam up, and people never get to see or hear what we’d hoped to share with them. Only part of it comes through.

My Gifts to You

My first gift to you today is the free 20-minute taste of the Performing Beyond Fear exercise, which was recorded live at the 2017 summer program. If those 20 minutes inspire you to purchase all four tracks, you will not only actually experience this amazingly transformative, short exercise, but it will take you right into the world of our summer program—especially in the wonderful Question and Answer session with the participants in the final track. And if you’re inspired by all that, I warmly invite you to take the plunge and join us at next year’s program.

My second gift for you today is to fill in the picture of the summer program a little more.

The program happens on the beautiful campus of Edinboro University, in Erie, Pennsylvania, and it’s called Mindfulness, Confidence, & Performance: A Transformative Program for Musicians. It will take place July 21 — 28, 2018.

We walk past this lake a few times a day, between the dorm and the music buildings, where we have practice rooms, a rehearsal hall, a recital hall, and an 800-seat concert hall. Daily sessions in mindfulness techniques, as well as our morning discussion groups, happen in the spacious rehearsal hall, with windows looking out on green lawns and trees. After lunch, everyone has time to practice their instruments, applying the techniques taught in the daily master classes, in which we apply techniques of the Art of Practicing, begin mid-afternoon on the stage of the concert hall. One evening in the middle of the week, everyone is invited to ride to a gorgeous beach on Lake Erie before sunset. And on the last night of the program, participants are invited to play in a celebratory concert for the local community, followed by our own private party at a restaurant. We end the program the following day with mindfulness practice and a discussion group in the morning, and the closing lunch in the dining hall.

The mornings mindfulness practices—including meditation, Performing Beyond Fear, and Focusing—are followed by an hour of group discussion, in which both faculty and participants speak openly about issues they experience in practice and performance. The atmosphere is noncompetitive, warm, and supportive, and people often stay in touch after the program.

We designed this unique, transformative program for musicians who feel ready to let go of unhelpful habits, and take their music making to a whole new level. If it sounds appealing but you aren’t sure if it’s right for you, I invite you to set up a free consultation with me to help you decide.

The program is a huge gift to me too. I’ve taught ten of these weeklong programs now, and the experience of seeing people open up their playing so much in that span of time is extraordinary. Discoveries happen every day, and people find out they can do things they never knew they could. It’s as rewarding for me as any performance I’ve ever given. I get to offer my gifts, and to see people take off and fly with what they receive. I often wonder how it is that I’m so lucky to be able to do this.

A Shining Example of Performing Beyond Fear

Many musicians experience such extreme fear about performing that they view their audience as an enemy. The following story is an inspiring example of a brave musician who went beyond fear in front of an audience that was actually directing real hatred toward him.

In 1960, pianist Byron Janis was selected by the United States government to begin a cultural exchange between the U.S. and the Soviet Union, after years of intense animosity between the two countries. His first concert in Moscow followed the news that an American spy plane called the U2 had been deployed against the Soviet Union, which outraged the Soviet people. On the day of the concert, a man in the street recognized Janis and fired an imaginary machine gun at him, shouting, “Americanski, nyet!” When he walked onstage that night, many members of the audience greeted him by screaming, “U2! U2!” Their hatred was palpable, upsetting him intensely.

But somehow, as he sat at the piano and waited for them to quiet down, he found himself thinking, “I am not your enemy. I just ask you to listen to my music, which I want to play for you without rancor but with love.” From that place of love and courage, he gave his concert. At intermission, he received a long ovation, And at the end of the entire concert, people in the audience streamed toward the stage, some of them weeping. Deafening applause and cheering went on for 20 minutes, and one woman shouted, “You make us love America!”

It was Janis’s deep devotion to music and deep motivation to play from love that enabled him to rise above the hostility of his audience and to melt their hardened hearts. Although we may not feel up to meeting the kind of challenge he faced that night, we do share such devotion and motivation. Underneath our fear of performing, we always hold within us the power of our devotion to music and of our desire to share it with others.

I hope you will take heart from this story and at least consider the idea that you yourself are capable of finding a way to give joy to your audience, even though you may be quaking in fear. The Performing Beyond Fear exercise will help you do that.

I wish you much joy and success.