The Power of Slowing Down 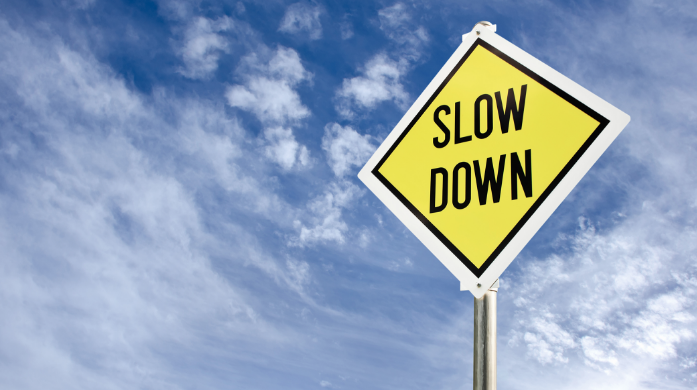 The pianist in a recent live online workshop was playing a piece by Schumann. All the notes were in place, and it was clear that he understood the flow of the music. His hands and arms were working beautifully. But I sensed that the energy in his lower torso was somehow blocked. He didn’t seem physically grounded―the music didn’t seem to penetrate him deeply.

The opening of the piece was written as a fast pattern of notes that could be broken down into block chords. I asked him to play each chord and linger on it until he could feel the effect of that harmony in his abdomen. He played the first chord―a minor triad spread over two octaves. After a few seconds he played the second chord, a different minor triad. After listening a few seconds he said, “Oh, shit.“ The music was obviously starting to get to him in a bigger way.

Then he played the third chord in the same way, and the fourth. He was crying by now. He realized that he’d been so caught up in the speed and intense energy of the music that he hadn’t felt the powerful sadness that was part of it. He went back and played the opening as it was written―in the textured pattern―and now the music was clearly affecting his whole body. We all felt the transformation in his performance. His whole self was feeling and recreating the living energy of Robert Schumann.

A Non-Pianist Tries the Same Approach

A few days later a clarinetist came to my studio wanting help with performance anxiety. Because he seemed physically adept at the clarinet, and becaue I am not a clarinetist, I didn’t talk about details of his instrumental technique. But similarly to the pianist, he was clearly not feeling the effect of the sounds he was making. I gave him the same basic instructions I’d given the pianist. Since, unlike the pianist, he was new to this approach, and It took him several tries to go slowly enough and focus intently enough to notice the sound really affecting him inside his body. But with the first recognition of that experience, he too said, “Oh shit.“ And he too got tears in his eyes.

He proceeded to allow himself to take in every sound of this music he loved. Feeling penetrated to the core by its beauty, he was overwhelmed with gratitude. He remembered why he had become a musician in the first place.

How Does This Help Us Perform Beyond Fear?

We are all so busy, in our practicing and in our lives, that we rarely take the opportunity to do things slowly enough to notice how incredible every sensory experience can really be.

I knew that the performance anxiety of the clarinetist was in large part due to the fact that he was not connecting enough to the music himself, so the prospect of trying to connect to his audience with this music threw him into a panic.

But the kind of daring we need on stage is the daring to be vulnerable and fully ourselves. And who we are, who these selves are, are musicians. People in love with music. And yet we routinely starve ourselves by not letting ourselves fully taste the beauty of the sounds we love.

We think that when we practice we have to try hard to accomplish things. We live our lives that way, rushing from one thing to another, just trying to get through our day and get things done. But in the process, we are constantly missing golden opportunities to receive the beauty that our eyes and ears are capable of perceiving and delivering to our hearts and to our whole being.

It’s true, we do have so many things to accomplish in every single day. But practicing music is a phenomenal opportunity to slow down and really relate to the magic and the power of every detail of the music―of our sensations of touch and movement, and also of the sensations that the sounds create inside our body.

The Forest and the Trees

Yes, we also need to relate to the phrases, to the structures and the architecture of a piece of music. And sometimes we can go ahead and step back from our magnifying glass, and look at the whole phrase, or section, or piece―we can appreciate the whole forest. But if we don’t also appreciate the miracle of every leaf on every tree in the forest, our performance becomes like a low-resolution photograph: People get a general idea of the piece, but the full power of it doesn’t come through.

Meeting the Challenge of Slowing Down

Because the pianist I mentioned at the beginning of the article had worked with me for a long time, it was pretty easy for him to get out of fast gear―to go extremely slowly and focus on the effect of the sound in his body. But for the clarinetist, it was his first time working with me, and he had never practiced like that before. He needed someone to guide him, to help him go even slower than he knew he needed to. Someone to say, “Hold on a minute―just stop―just notice―how is that sound making you feel inside? Don’t play the next note yet. Wait until you can really feel how this one is affecting you.”

A violinist who had come to me a few days before the clarinetist also took a while to understand this approach. In his case, he found himself constantly judging his sound instead of just noticing the sound and what feelings it produced in his body. But once he was able to get past his self-judgment and really connect to the sound, his playing opened up. Without moving excessively, his body looked much more free and comfortable. It was a pleasure to watch him really making music.

Finding Ways to Take a Break

Whatever it takes, we all need a chance to slow down. Over the holidays, I luxuriated in a much needed 11-day rest. I caught up on sleep, did more meditation than usual, and just let myself enjoy the beauty of the room I was in. If I felt like reading, I read. If I felt like writing in my notebook, I did that. The point was that I was letting myself simply be. It was an incredibly restorative time.

Meditation teachers often use the analogy of a glass of water that has been stirred up to describe how our minds are when we are constantly in activity. When you put the glass down and let it just sit there, the water stops moving and becomes very clear. This is what happens to our minds, bodies, and perceptions when we get out of the fast lane and can enjoy the scenery around us―and the feelings we get from it.

An Easy Way to Set the Stage for Making Music

The approach I call the Art of Practicing begins with three preparatory steps that allow us to slow down and just be: Stretch, settle down in your environment, and tune in to your heart. What do these simple things have to do with learning to be confident on stage? A lot.

They help us unwind, so that more of our natural coordination, intelligence, and heart are available. Then the whole activity of making music reaches a new level. Our natural musicality and joy open up.

I’d love to hear about what happens for you, in the comments below.

Warm wishes for joy and success in making music.

P.S. If you really want to have an amazing time slowing down and discovering hidden treasures in music―and in yourself―come to our summer program! The power of a whole group of people doing this as the same time makes it much easier to make a real shift in your musical life.