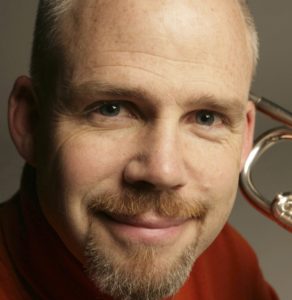 Conductor, educator, and trumpeter Stephen Burns is the Founder and Artistic Director of the Fulcrum Point New Music Project in Chicago. He has been acclaimed on four continents for his virtuosity and interpretative depth in recitals, orchestral appearances, chamber music, and multi-media performances. He has worked closely with composers John Corigliano, Osvaldo Golijov, Gunther Schuller, Jacob TV, and La Monte Young.

Mr. Burns is on the faculty of DePaul University’s School of Music and The Beinen School of Music at Northwestern University. A former tenured Professor of Music at Indiana University, Prof. Burns is a Visiting Lecturer with Amici della Musica in Florence, Italy. He is also an authorized instructor of mindfulness-awareness meditation and a certified teacher of the Art of Practicing.