I am so glad to welcome another beautiful article from Nora Krohn in today’s issue. It has been a joy and privilege to watch Nora grow as a musician and person, to the point where this coming summer she is joining our faculty.In this seventh article of hers for Fearless Performing, Nora goes right to the heart of the matter in describing how self-love is at the core of confidence onstage. 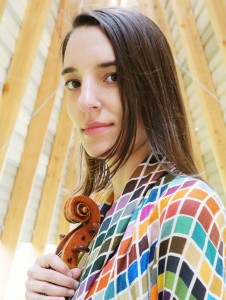 A few days ago I was grudgingly contemplating the prospect of writing a long-overdue post to my blog on the inner life of being a performing musician. I had a collection of unfinished articles that had begun with promising ideas, but then fizzled out once I felt the inspiration wane. After posting my inaugural article “On Jealousy and True Belonging,” in July 2014, I had received thousands of messages from musicians, both friends and strangers, who responded positively to its message about finding a sense of belonging no matter where we are in the world of music. Some of the messages were heartfelt thanks from people who felt my words had reached them at a critical time. Others were full of good-natured advice from older musicians. As I read these kind messages, something struck me about my writing, and it was so obvious I couldn’t believe I had never noticed it: I had been so focused on identifying and grappling with the obstacles to becoming a confident and fulfilled musician, and helping others do the same, that I had completely neglected to honor the immense changes I’ve experienced since writing that first article.

A couple of years ago I was having coffee with a violinist friend, talking about these very obstacles I’ve spent the last few years confronting and chronicling. She recounted something her therapist had said to her: “Artists, especially musicians, are so disciplined and ambitious. You’re always focused on how much farther you have to go up the mountain. When do you stop and admire the view, congratulate yourselves on how much you’ve climbed already?”

The Root of the Problem

When I first began to confront my fear of performing in a more direct way, it didn’t take long for me to realize that the process wasn’t just about changing my practice habits, or refining my technique, or getting more experience as a performer. Instead, it was about a much deeper issue that was directly influencing all of those things: my attitude toward myself. When musicians struggle with major roadblocks to playing and performing the way we want to, our relationship to ourselves is often the last place we look. Usually our musical education is focused on accumulating an intimate knowledge of our instrument and the musical tradition we follow through study with a respected teacher, practice, and performing experience. Through exposure to our teachers’ expertise, exploration with fellow students, and performing, we gain proficiency and confidence. For plenty of people, this model seems to work.

For others, the fear of performing goes beyond garden-variety nerves that can be managed with adequate preparation and experience, and reassuring words from teachers and friends. After years of dedicated study, I eventually realized that my efforts to be a confident and effective performer were just fussing around the edges of a major problem: if I didn’t approve of myself, how could I ever become truly at home giving myself to an audience?

As discouraging as it was to realize how much havoc my attitude toward myself was wreaking on my performing, it was also a relief to understand why after so many years of refining my technique and getting more experience as a performer, I felt no more confident than before.

Even after I became aware that self-love was not part of my vocabulary or experience, I had no idea how to change that. I tried meditation, therapy, and affirmations, and It all helped. But the words “self-love” and “self-worth” remained benign yet remote concepts. Then, about a year ago, I encountered a style of meditation called lovingkindness meditation that helped me start chipping away at the self-contempt that undermined my sense of worthiness as a performer. I knew I was on the right track when doing the practice produced a tangible physical and emotional effect—I was starting to experience giving kindness to myself, not just thinking about it. I continued to struggle with my demons, but I felt I had my stronger, kinder, wiser self alongside me.

One night while I was out of town for an orchestra gig, a couple of months after discovering lovingkindness meditation, I tried a practice advocated by one of my favorite meditation teachers, Tara Brach, in which I imagined I had only one year to live, then six months, then one month, then one day, then only one minute, and asked myself how I would wish to spend my remaining time. In doing this powerful practice, I realized that one thing meant far more to me than anything else: Love. And by not loving myself, not only was I hindering myself as a performer, but I was in a very real sense cutting myself off from the most vital source of well-being. When I finally understood how much my feelings of inadequacy had taken from me, it filled me with a sense of urgency and resolve. As my mentor Madeline Bruser writes in her brilliant book, The Art of Practicing, “We have one lifetime in which to express ourselves and connect to others. A performance is in that sense a microcosm of life: We have one chance, and we want to give it everything we have.”

Last summer, on the day of the closing concert at Madeline Bruser’s summer program, I was walking to lunch by the quiet lake on campus, mulling over my performance later that day and my career in general. I’d had a great week—affirming masterclasses, deep conversations with wonderful, like-minded musicians, and fun rehearsals with the pianist I was working with. During one master class, I remarked, a little bewildered, “For the first time in my life, I feel like nothing is wrong. I have something to say, and you want to hear it, and I’m saying it.” I burst out laughing. Everyone applauded.

Walking around campus that day, enjoying the warmth of the August sunshine, these words came to me: “Whatever I set out to do, I’ve done it.” I knew immediately what it meant—and what it didn’t. It didn’t mean there was no further progress to be made in my playing, or no career ambitions. It simply meant that I could stop trying so hard to meet my own internal standards of being an adequate performer, because I had already met them. Not by practicing harder or getting better gigs, but by learning to approve of myself. And in that moment, something lifted. That night I felt more free and at ease onstage than ever. And in the months since I have found more ease, confidence, and enjoyment than I ever thought possible when I started this journey.

What helped me enormously was hearing accounts of people, artists and non-artists, who had radically changed their outlook through a consistent practice of cultivating self-approval. I had always looked at confident performers onstage, and thought, “Well, they were just born confident and talented. I’m not like that. I can work twice as hard as anyone and still blow it.” If you often have similar thoughts, know this: lack of confidence as a performer is not a life sentence. Confronting the reasons behind it requires tremendous courage and a persistent discipline of kindness. But my view is that if you are deeply drawn to being a performer, even if you don’t know why, then the greater the obstacles you face, the more you have to gain from meeting them.

Of course, learning to love and approve of ourselves is far from a one-shot deal. Old habits die hard—doubt creeps in before an important performance, envy of our colleagues gets the better of us, self-recrimination for a mistake drowns out the audience’s enthusiastic applause. But just because we are temporarily separated from the wisdom we uncover doesn’t mean it disappears. Self-approval, and organic confidence, are acquired, not inherited traits. And no matter where you are on the path of becoming the performer you want to be, please don’t wait until you’ve summited the mountain to turn around and admire the view gained by your sincere effort, and to appreciate yourself for being willing to work for it. The love you bear for yourself will be the best companion on your climb.

My daughter is eleven and very serious about the piano. The Art of Practicing seems particularly suited to adults, who have enough sophistication and self-awareness to understand it well. How can it help someone as young as my daughter?

Actually, the Art of Practicing can go a long way in helping a child develop self-awareness, which can be amazing. And the earlier a musician learns a healthy approach to practicing and their instrument, the better off they are.

Between the ages of 10 and 16, the body is growing very fast, but the parts are growing at different rates. Bones might be growing faster than ligaments or muscles, for instance. So it’s a stage where kids can be awkward, and if they aren’t using their body efficiently, they can easily set themselves up for serious technical problems later on. So with the physical approach alone, it’s important to have a strong start.

An eleven year old can also begin to understand that it’s important to treat themselves well during practicing. Rather than having a parent or teacher pressure them into practicing  a certain way or for a certain number of hours every day, if the child learns to trust herself in practicing, to follow her natural interests and intelligence, she will develop a real foundation for lifelong enjoyment and confidence.

Part of the Art of Practicing approach is to draw out the student’s own awareness and perceptions of how they feel and sound when they’re practicing, so that they are not simply blindly following their teacher’s advice. A good teacher will encourage the student to notice all kinds of things about their practicing experience, and to think for themselves in making improvements in their playing. The teacher and the student need to work together in a joyful and creative way to bring out the very best in the student’s physical, mental, and emotional abilities.

Making music is extremely challenging in every way. It is worth taking quite a bit of time to choose an excellent teacher and approach for a student of any age.

Submit a question for possible inclusion in next month’s issue of Fearless Performing.

This e-zine, the summer program, and so many other things would not have been possible without the support of the amazing Board of Directors of The Art of Practicing Institute. I would like to extend my heartfelt thanks to them all: Chair and Secretary Mary Duncan, Summer Program Administrator Daniel Burdick, Paul Walker, and Amy Lam.