In Defense of Doing Things that Scare You 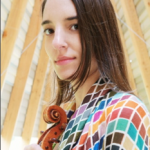 A few weeks ago, my husband and I played a show together in New York that I had plenty of reasons to be nervous about. For one thing, it had been a while since we’d played a formal concert as a duo–the previous year our free time had been consumed with planning our wedding, and the ongoing work of trying to build a teaching studio–so we felt a little rusty. Also, I was exhausted from driving 425 miles back to New York from the weeklong Art of Practicing Institute summer program the day before. In addition, the pieces we’d chosen to play were fairly virtuosic, and since we hadn’t rehearsed in over a week there was no telling what kind of shape they would be in. And the venue was a prominent space for very avant-garde, improvised music, and we didn’t know if anyone would appreciate the pieces on our program. To top it off, we were the closing set in a composer residency, where we would be premiering a new work by the composer. And did I mention that both my husband and the composer of the piece we were premiering are, like myself, also violists? Excellent violists?

Like I said, I had plenty of reasons to worry about what might happen, and how it would be received.

Choosing to Trust Myself

But earlier that week, I’d had some helpful preparation for this event when I attended the Art of Practicing Institute summer program for the fourth consecutive year. While every year had been quite different from the previous, this one was especially different: I was returning as an assistant teacher. When program founder Madeline Bruser initially invited me to teach, I was full of doubt. I was by far the youngest and least experienced teacher on the faculty, and I wasn’t sure I’d learned the principles well enough to teach them to someone else, let alone someone who didn’t play the same instrument as I did. I’d only recently begun to gain greater confidence as a performer, and I wondered if I would be able to set a courageous example in the closing concert. And I’d been through so much emotionally in previous years at the program, I wasn’t sure how well I would be able to attend to others who needed support.

In spite of my worry, I knew that Madeline had asked me to teach for a reason—she saw I was ready to grow even more. Going into the week, I decided that I wouldn’t try to force myself to be any different than I was. The purpose of my being there, I reminded myself, was not to prove I was worthy of praise, or show how much I knew already. The purpose was to learn more, and to share what I had learned for the benefit of others.

Surprisingly, it went pretty well. I managed to teach effectively, by relying on my own knowledge and instincts, asking for the student’s input, and accepting lots of guidance and feedback from other teachers. When internal emotional turmoil arose, I handled it skillfully, and it passed. When participants asked me questions about meditation or performing, I tried to answer fully and truthfully—offering whatever wisdom I may have had without obscuring the messy reality of my own situation. Something strange seemed to be happening: I was choosing to trust myself, and I wasn’t failing.

But Would It Hold Up?

Between the full daily schedule and my need for rest, I didn’t have luxurious amounts of time or energy for practicing. I knew the two movements of Schumann that I planned to play in the concert quite well, and since the pianist who would be accompanying me had learned them beautifully, there wasn’t a lot for us to do. In my three previous years of playing in the master classes, I had delved deeply into the nuances of my playing and my sometimes thorny relationship to performing, with a supportive audience witnessing my struggle and transformation. But this time, I was mostly witnessing others’ transformative experiences. In a way, it was was a relief to play a more supporting role, but also a little disorienting, and I didn’t know how I would fare playing in front of everyone for the first time on the last night of the program.

Inevitably, it all came down to trusting myself, again. I’ve come to see it as an act of will, a choice to stay open, ask my mind to relax, and let my intuition take over. [fear is an instinct too.] Doubtful thoughts tend to appear no matter how well I’ve prepared or what the circumstances are. But everything depends on how I respond to them: when I become involved with them, or linger over them, my mind contracts, I lose touch with the moment, and my playing falters. But when doubtful thoughts arise and I can acknowledge them and immediately come back to the moment, I sail through split-second lapses before they interrupt the flow. I am beginning to get a feel for this experience of riding the razor’s edge—and not falling off—but it’s still quite new. All week I wondered if during the concert a wave of anxiety would well up as it had so many times before, and if I would be ill-prepared to meet it.

But the main thing I felt instead, in the hours before the performance, was a very unfamiliar feeling: calm, steady, groundedness. There was no squeeze of anxiety, no burning shame about my faults or eagerness to strut my stuff. I felt almost empty. I wondered if my lack of fear or passion was downright disrespectful, a sign that I didn’t care enough, except that there wasn’t anything I could do about it. Previously, I couldn’t control my fear; I could only accept it as it was. This time, I couldn’t control this strange, new sensation of inner calm.

I did feel a little more anxious right before I walked onstage, but the feeling of basic trust remained. It felt simple, direct, unadorned. I was standing on the earth, and there was no risk of falling off. I walked onstage, bowed, played the two movements without any mishaps, bowed again to warm applause, and left the stage. I had chosen to trust myself, radically, and the disaster I’d been fearing never materialized.

Trying It Out in the Real World

My experience playing at the closing concert of the summer program was still fresh in my mind when my husband and I were preparing to go onstage for our duo show back in New York. Again, I saw that my only choice was to trust my preparation and my instincts, and to do the best I could. And again, I found that in spite of my discomfort with some parts of the situation, I felt physically calm and grounded. As we played, I let go of all judgment and kept coming back to the present, over and over.

To my surprise, the show was great. We played with conviction, and the audience was full of enthusiasm and appreciation. I felt honored to have had such a rich experience in a culturally important space, and proud of my partnership with my husband. I couldn’t believe it had been so…simple.

In reflecting on all of this, I remembered a conversation I had about confidence with Madeline during our week together. I told her that I’d begun to see that, while confidence can be eroded through negative social conditioning, it can also be (re)learned through positive experiences with facing our fears. She quickly agreed—this route to confidence is a foundational premise of her teaching. But when I mused that perhaps some other performers are simply born confident, she gently corrected me. “Nora,” she said, “remember that every single human being is born a helpless baby. No one is born confident.”

Her words flipped a switch in my mind, and something new was illuminated.

Confidence = Trusting Yourself in the Face of Uncertainty

In the book Conquering Fear: Awakening the Heart of True Bravery, Chögyam Trungpa says, “Whenever there is doubt, that creates another step on your staircase. Doubt is telling you that you need to take another step. Each time there is an obstacle, go one step further, beyond that, step-by-step.”

No one is born fearless, but we can cultivate fearlessness–not through getting rid of fear, but meeting it and then going beyond it. What this summer’s experience clarified for me is that we can’t become fearless without going through fear: that’s like trying to swim across a river without getting wet. But each time we meet the fear of performing with the right kind of attitude and preparation, we grow a little bigger than the fear, and it controls us a little less than before. Eventually, we may have performances where the fear seems so diminished that it’s hardly there at all: but it’s not because we’ve made the fear smaller, it’s because we’ve gotten bigger.

When I first started learning the Schumann piece I performed this summer, over a year ago, I went step-by-step toward the confidence I wanted. I started by feeling and appreciating my enthusiasm for learning a new recital program of music I felt deeply connected to. I was mindful of recital dates I had scheduled, but instead of frantically trying to learn everything at tempo right away, I took my time. When tricky passages eluded my command, I examined them with a sense of curiosity rather than urgency—what makes this so difficult? What’s getting in the way of the flow here? What am I doing with my hands in this spot? What does this harmony sound like when I play the piano chord under it and sing my note? Gradually, I learned everything up to speed. When it was time to perform the pieces for the first time a few months later, my connection to the music was durable even though I felt nervous, because I had taken the time to learn the music deeply, and I had positive associations with it from the many pleasurable hours I’d spent working on it. As I had more chances to perform the pieces, I learned even more about them. And each time I met the fear of performing and stayed open, my sense of trust in my own command grew stronger. I was learning the music, and I was learning fearlessness at the same time.

As I’m discovering, the experience of learning a piece deeply can take months or years, but we can also relax and enjoy the process. Likewise, though the ascent from fear to fearlessness is a continuous journey—because life always seems to lead us to new challenges—we can celebrate this boundless opportunity to grow.

And, I now believe that climbing from self-doubt into confidence gets easier with practice. Although we can never predict what will happen in a performance, each time we make the trip, step-by-step, we know the way a little better for the next time.

P.S. If you’re interested in trying out this path to self-trust in practicing and performing, I highly recommend that you check out The Art of Practicing Institute’s brand-new online community program, which you can find out more about here. A welcoming, nonjudgmental group like this can give you vital support in becoming the musician you want to be.