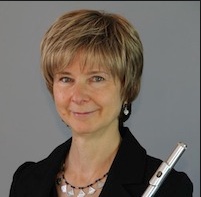 Flutist Cathy Baerg is a graduate of the University of Ottawa performance program, where she studied flute with Robert Cram. As a student, she was awarded the Mrs. O.J. Firestone scholarship and later received a grant from the Floyd S. Chalmers Fund, which enabled her to study in England with William Bennett and Peter Lloyd.

She continues to take great pleasure in playing with local musicians, usually in chamber music settings, and has recorded a CD as a member of the flute quartet Opus Four. She has practiced mindfulness-awareness meditation since 1998, and is a certified meditation instructor and teacher in the Buddhist tradition.