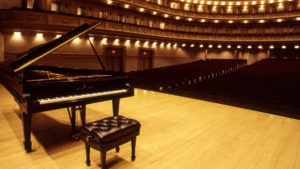 This story shows how personal bravery overcomes performance anxiety and uplifts an audience.

After Laura‘s amazing breakthrough last week, she joined the workshop again this week, performing a major work from her program in the concert hall she would be playing in two days later. It was great to see her sitting on the stage at the nine foot Steinway.

It’s hard to describe Laura‘s presence in that workshop. Even on the computer screen, she commanded the stage. She played with such assurance, relaxation, and powerful energy.

I made a few small comments to her afterwards about specific sections, but generally she was obviously completely prepared to give a terrific performance. Others at the workshop gave her wonderful feedback also, and the last person, a musician in British Columbia, said, “Laura, you really belong on that stage.“ Laura‘s whole face changed hearing that, and she started wiping tears from her eyes. I started crying too.

I asked her what that comment meant to her, and she said that for so many years she had felt like she didn’t belong on the stage—that she wasn’t a real performer.

I talked to Laura and the whole group about how we live in a culture that worships celebrities, a culture of people who don’t believe in themselves and feel that if they are not a great, highly successful performer, they don’t belong on the stage at all.

I told them that my mission is to bring out the greatness that is in every musician. It’s a myth that only a rare few can give great performances. That’s why I’m training Laura and other teachers to pass on a deep, holistic kind of teaching to other musicians. Every time I see a so-called ordinary person shine onstage like that, it strengthens my conviction that performing is not just for the rare few. It’s for anyone who longs to express themselves and to share their musical gifts with others.

I feel incredibly lucky to have this beautiful community of musicians to work with—people who share their hearts openly and talk about what it feels like to perform. How I wish that more musicians felt safe enough among their colleagues to receive support and encouragement and to go right ahead and open their hearts onstage.

Making music is not about being a famous star. It’s not about impressing anyone or reaching a certain level of accomplishment or success. It’s about being a full human being and offering your heart and your artistry to help other people feel more human themselves. It takes courage to do that. The courage to be vulnerable and genuine. And when someone truly shares themselves that way, everybody feels it.

Thank you, Laura, for your bravery and your beautiful musical gift. And thank you to everyone in the workshops for supporting each other and fearlessly moving forward with your performing. You repeatedly and consistently strengthen my faith in humanity.